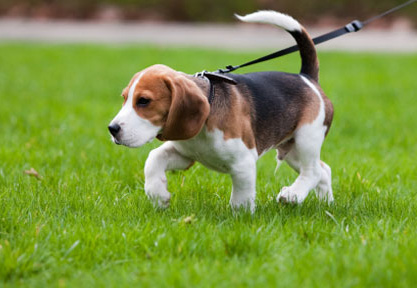 How To Teach Your Puppy To Walk On A Leash

All dogs – whether they trot along the trails at Tanglewood Park or run free in the countryside – should know how to walk on a leash. Forget about fancy “heeling,” where the dog’s shoulder aligns perfectly with the dog-walker’s knee. We’re talking here about a simple partnership in which the dog and the person on the other end of the leash can get out together in the fresh air without a major struggle.

The reward for walking properly is praise and the walk itself. So what about the negative aspect? How do you withhold a walk? The answer is to stop in your tracks whenever your puppy pulls and don’t start again until the leash slackens. Then, praise the pup and walk on. Then again, you can show your dog who’s the boss by walking in the opposite direction whenever he pulls. If he persists in pulling, you should tell him “no,’’ but don’t make a fuss. It’s far better to praise him loudly and show affection when he lets the leash loosen up.

Most young puppies resist collars and leads by rolling, scratching and collapsing. But don’t give up. Don’t pick your pup up and carry him, and don’t let him just stroll along beside you without the leash. If you do, you’ll soon have an uncontrollable dog.

Buy a flat, lightweight nylon or leather buckle-style collar and a four or six-foot lead of the same material (chain leashes are generally a bad idea because of their weight).

Put the collar, without the leash, on the puppy, praising and rewarding him for any sign of acceptance and ignoring his efforts to wriggle out of it. Next, attach the lead and allow the puppy to drag it along, watching carefully to discourage him if he starts to chew it. With patience and some well-timed rewards, your pet may surprise you by how quickly he accepts his new appendage.

Finally, pick up your end of the lead and allow your dog to explore. After this introduction, however, even the youngest puppy’s impulses should be controlled to match your expectations.

Training collars are better for teaching older puppies and adult dogs. Probably the most efficient and humane passive training device is the head collar or head halter, with which even veteran people-yankers can quickly learn to walk nicely. In contrast, the “choke” collar is intended to constrict around the dog’s neck when tightened. Choke-type collars are frequently misused and work on the punishment principle. As the dog pulls, the handler is supposed to deliver a small “jerk” of the lead and then immediately release or loosen the lead. This way, you “correct” (or, more accurately, punish) the dog quickly and decisively. Many people assume a dog will teach himself by choking as he pulls. Countless animals have simply learned to live with this choking device as they tug along, coughing and irritated, but never learning to slow down. The humanity of using choke collars has recently come into question. They should never be used on puppies, toy breeds, or dogs with tracheal or other neck problems. A little knowledge, a lot of patience, and positive training go a lot further when training a pup to walk on lead and are a lot better for your relationship with the pup.