Fear of Thunder and Other Noises 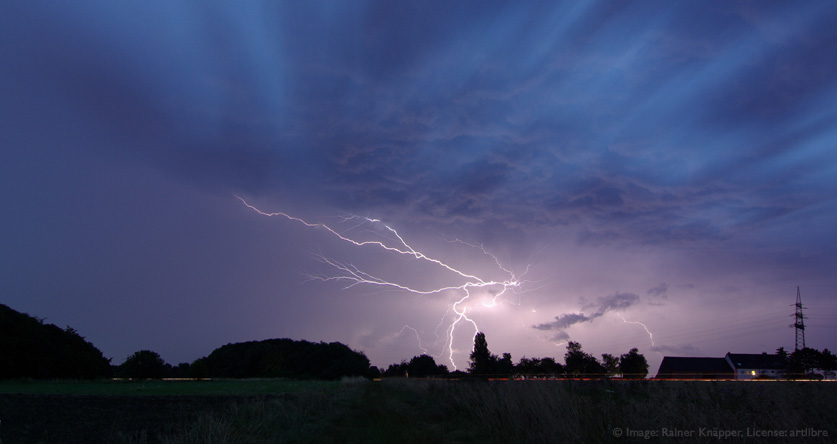 Few species – including humans – are happy to endure the sounds of a rip-roaring thunderstorm, complete with darkening skies, lightning and crashing thunder. Some become extremely fearful to the point that they exhibit full-blown phobia.

Some dogs and cattle, as well as some humans, are affected by this phobia. Other creatures, like cats, are probably far from comfortable but most don’t seem to become overtly storm phobic – although there are some notable exceptions.

Before considering the specifics of thunderstorm phobia in cats, it is worth emphasizing that fear is a normal response to a fear-inducing situation or circumstance. Phobias are extreme, irrational fears in which the fearful response has been magnified to the point of dysfunction. It is reasonable, and biologically sensible, to be a little uneasy during a lightning storm – to avoid open spaces and seek cover. But when an animal gets completely distraught at the first roll of thunder and perhaps harms itself in frenzied attempts to avoid the perceived mortal threat, then we are talking about phobia. Cattle that become spooked and stampede off a cliff, and dogs that hurl themselves out of third story windows, illustrate this point.

So where do cats fit into this paradigm and why? Many cats, quite sensibly, tend to become nervous during storms and remove themselves from the fray by hiding under beds or in cupboards. This self-preservation response qualifies as fear. Unlike dogs, however, cats tend not to advance to the phobic stage, perhaps because their strategy of avoidance works. They hide; the storm passes; they emerge unscathed.

Dogs often start out sensibly, too. Dogs that eventually become phobic often show fear in the first year or two of life but, at this stage, the fear is only mild to moderate. They may pace anxiously and seek their owner’s company – for protection. But then they may have a sudden augmentation of their fear of storms a few years later – for no apparent reason. I hypothesize that this augmentation may occur because injury is added to the insult of the storm, specifically, that they may be subjected to a particularly loud clap of thunder or receive a painful static shock during a severe electric storm. The aversive event confirms and magnifies dogs’ suspicions of the danger implicit in storms.

Large, thick-coated dogs are most commonly affected by severe thunderstorm phobia lending some credence to the static electricity theory. By comparison, cats and small, thin-coated dogs are somewhat immune. Cats usually prefer to hide rather than pace and explore escape routes, so exposure to potential danger is minimized. Some dogs learn to stay in a safe place during storms – though often not until the phobia is well entrenched.

Full-blown thunderstorm phobia is uncommon in cats but it does sometimes occur under certain unusual circumstances. One cat became storm phobic because she received an electric jolt from a nearby telephone jack (the result of a secondary lightning strike) while on a countertop. During future storms, the cat hunkered down, hair coat raised, tail all bushy, and hissed and spit. This would not be a good time to pick the cat up to comfort it for fear of redirected aggression.

Signs of Thunderstorm Fear/Phobia in Cats

Though many cats are fearful during storms, thunderstorm phobia in cats is rare. A computer search of the scientific literature produced no results when the key words thunderstorm phobia, noise phobia, and cats were cross-referenced. So, while it is unlikely that you will find your cat pacing and howling during a storm, you may well notice that it just isn’t around. If you search for your cat you may find it under your bed, perhaps anxiously grooming. Does this mean it’s frightened? Absolutely! But is this phobia? Not really. Although you can just leave scaredy cats alone, it is more humane to condition them out of their fear through the use of delicious food treats. The way to a cat’s heart is through its stomach – and that maxim applies just as well when its knees are knocking as it does at other times.