You’re standing in the pet store and there they are: row after row of crates, just big enough for a dog. They’re made of fiberglass or plastic or just plain open wire. For all their differences, they evoke just one thought: Jail.

Not so fast. Despite their appearance, crates can be a boon for a puppy – a “home-away-from-home” or a comfortable retreat for when the rest of the family gets to be too much. Also, crates are great tools for housetraining, because dogs don’t like to soil their immediate environment. In addition, for car travel, inside a crate is probably the safest place for a puppy to ride, and, for pups that have to fly cargo, crates provide a touch of the familiar on the plane. 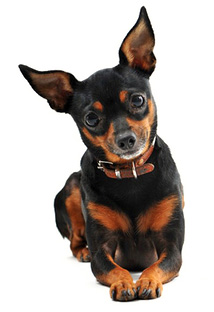 Making Pups Comfortable With the Crate

First, make sure you don’t isolate your pup when he’s in his crate. Buy two crates, and put one in your bedroom – so he can sleep beside you at night – and the other in a busier part of the house for daytime use. Line the crate with a soft blanket, put in some small treats, and then show the puppy how to get in.

Once your puppy has figured out how to go in and out of his crate, and has satisfied his curiosity about it, use a cue word – such as “kennel,” as he moves toward the crate, and hand him a treat as soon as he enters. Repeat this several times at random intervals until he goes in when he’s told to. At this point, you can shut the door for short periods, without making a big fuss about it. In fact, it’s best to ignore your pup while opening or shutting the door.

Once your puppy is willing to rest in the crate, start confining him for varying periods of time, and at different times of the day, while you’re at home. The more random and persistent you are, the less the dog will worry when you do have to leave the house. With this kind of routine, your puppy will learn to rest while crated, and that’s exactly the way you want him to feel – at home, relaxed and comfortable in his own little den.

Learning to Love the Lockup

Occasionally you may want your pup to be in his crate when he wants to be out. Don’t try to fool him, by calling him to you and then forcing him into the crate. Instead, use a command like: “Go to your crate,” and lure him in with a little food. Hand over the treat as soon as he settles down inside the crate, and praise him and keep feeding him while he’s inside. The minute he ventures out, turn off the food supply – and the charm.

Put a few pieces of kibble in the crate so the pup will develop the habit of going into the crate by himself, earning more praise and even more treats. Sooner or later, he’ll learn that he gets lots of attention, affection and goodies inside the crate – and very little in the way of treats outside the crate.

By the way, never put your pup in his crate for misbehavior “time-outs”/punishment. Using a crate in this way will render it aversive and therefore less useful as a behavioral management tool.

The Crate and House-Training

To confine an untrained dog for a long time is to court disaster. If the pup is forced to soil in his crate, the crate will no longer inhibit his elimination there and will be of no help when you wish to employ it for house training. Basically, house-training a dog is solving a spatial problem: You want to teach the dog to eliminate only in one place – outdoors. During the training period, it’s up to you to set limits. For example, if you don’t allow your pup free access to the living room and bedrooms, he can’t make a mess on the carpets there.

Because most puppies can’t control their urine and feces for extended periods, the most important part of any house-training program is setting up and sticking with a schedule that your puppy can maintain. Feed him at consistent times of the day and watch his natural schedule: Puppies usually need to eliminate shortly after waking up, after eating, and after playing. Young puppies may need to urinate every four hours.

When your pup eliminates in a designated area, praise and reward him immediately and play with him. People usually reward their pup for urinating outside only after they have brought him back indoors: This is a mistake because it rewards the pup for coming inside, not for eliminating outside. Instead, keep a few treats in your pocket and hand them out on the spot.

If your pup repeatedly messes inside his crate, take him to your vet to rule out medical problems, such as intestinal parasites and urinary-tract diseases.

If you need to be away from home for a few hours, hire a dog walker to take the puppy out, or enclose your pup in a large pen to provide him with an opportunity to eliminate away from his resting spot. Leave newspaper or training pads down in one area when you are gone – but pick them up once when you’re home.

Punishment after the fact doesn’t work. If an “accident” happens, clean it up with a good enzymatic cleaner and blame yourself: You’re the one who wasn’t supervising the pup at the time the “accident” occurred. If you catch your dog in the act of eliminating indoors, make a loud noise to distract him, and then take him outside right away.

Dogs with separation anxiety will often urinate, defecate, or bark when confined. In fact, some dogs become so anxious when confined that they destroy their crates and hurt themselves in the process. These dogs may do better when confined in a larger area, but if the problem still persists, see your vet or check with a veterinary behaviorist.

Choosing a Crate for Your Dog

Crates come in different styles and sizes. Prices range from about $75 to $175. A comfortable crate should be about twice the size of your pup. The most common types are the pressed fiberglass models favored by airlines and the open-wire cages that are available at most pet stores. Fiberglass kennels are the most sturdy and the safest for traveling in a car or airplane.