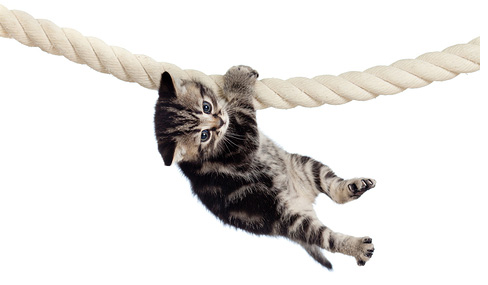 Your kitten is so cute and adorable – she could never do anything wrong. Or could she? Some kittens can be feline terrors, leading you to question your decision about bringing a kitten into your home. Before finding a new home or banishing your cat to the perilous outdoors, consider learning about the problem, how to deal with the behavior, and re-train your pet. With proper know-how, your cat can be a loving and playful member of the family, providing hours of amusement. The best way to deal with behavior problems is to avoid them in the first place. Learn the best way to socialize and introduce your new kitten to your home. If you are adopting an orphan kitten, be aware that they have their own set of issues.

Here are a few behavioral problems that you might encounter:

Feline aggression. Aggression is a natural behavior for the cat and was a behavior necessary for the survival of cats’ wild ancestors. Cats have five weapons with which to attack, including a widely opening mouth with well-appointed with penetrating teeth, and four paws bearing needle-sharp claws.

Play aggression. Kittens are adorable, but when they are around four months of age, a shady side to their personality sometimes emerges – a side that involves aggression. In an instant, a kitten can turns aggressive, inflicting painful scratches and bites. Play aggression, as it is called, is a normal feature of feline development. In time, it diminishes and eventually disappears but sometimes immediate relief is requested by anguished owners.

Predatory aggression. Predation is the way in which cats in nature obtain their food. It is debatable whether this behavior classifies as aggression in the true sense of the word, but because it involves the destruction of a third party it is usually classified along with other forms of aggression. Typically, cats hide behind walls, stalking and pouncing on approaching feet and ankles, inflicting scratches and minor bite wounds. Mature cats will capture and kill small rodents and birds.

Medical problems. There are a variety of medical causes of aggression in cats. These include hyperthyroidism, ischemic encephalopathy, brain tumor, head trauma, and thiamine deficiency.

Feline fear. As unpleasant as fear may be to experience, it keeps us and our animals safe by encouraging caution and by preparing us for fight or flight when danger threatens. Problems arise, however, when fears become so excessive and irrational that they disrupt normal functioning.

Separation anxiety. Separation anxiety in any species implies a lack of self-confidence and over-dependence on others. Cats with separation anxiety don’t howl and bay like dogs and they don’t chew on doors and windowsills in frantic attempts to escape. Their misery is far less obvious than dogs’ and it sometimes takes a sleuth of an owner to appreciate what is going on. But inappropriate urination in the home, occurring only when the owner is away, is a good clue.

Thunderstorm phobia. Few species – including humans – are happy with the sounds of a rip-roaring thunderstorm, complete with darkened skies, lightning and crashing thunder. Some animals become extremely fearful, though, to the point that they show a full-blown phobia. Cats are probably far from comfortable in storms, but most don’t become overtly phobic – although there are some notable exceptions.

Compulsive behaviors. Compulsive behavior initially may be performed as a displacement behavior. For example, when a cat is torn between responding with aggression or running away, it may displace into a seemingly unrelated behavior, such as self-grooming, as a way of reducing emotional tension. The most common compulsive behaviors exhibited by cats include wool sucking or fabric eating, over-grooming/hair-barbering/hair-pulling behavior, and feline hyperesthesia.

Feeding compulsion. Many cats suffer from eating compulsions. Like people, cats may use their compulsive disorders as an outlet when their natural behaviors are somehow frustrated by poor management practices and/or a restrictive environments. Genetic factors may also be involved.

Hoarding behavior. In the domestic situation, depositing dead prey animals on the front doorstep is probably one of the most well known forms of feline gathering behavior. Collecting and hoarding of shiny objects, including jewelry and small metal objects, may also occur. The items are not just retrieved; they are stashed and hoarded for no obvious reason.

Hyperesthesia. Cats affected by this syndrome show the most bizarre character changes, sometimes appearing to hallucinate, act manic, schizophrenic, or even “possessed.” The behavioral change occurs in bouts.

Psychogenic alopecia. The result of compulsive hair pulling is alopecia (baldness) that can be so mild as to be barely discernable or so severe as to completely denude wide areas of skin. The areas most commonly involved are the abdomen and the inside of the limbs.

Furniture scratching. Cats love to scratch. Unfortunately, the things they love to scratch are often the legs of your antique table, your upholstered sofa, or your expensive stereo speakers. And no amount of reprimanding or pulling at your hair in frustration will make them stop.

Jumping on counters. There are two reasons why cats find counters so appealing: 1. Because cats naturally prefer a three-dimensional environment 2. Because they occasionally find food morsels on counters while patrolling there. You could work on training your cat not to jump on counters – or you could teach yourself not to worry about counter-surfing so much. Once you understand what is behind the behavior and realize what is needed to correct the problem, you are well on your way to having a long and happy life with your new kitten.

Signs of Illness. With daily monitoring, illness can be detected and treated early. Any kitten that is losing weight or is not consistently gaining weight needs medical attention. Continuous crying also indicates a problem. If the mother is neglecting selected babies, those babies need your help to survive – you may have to remove the neglected babies and hand raise them. Some mothers instinctively know if a baby is not thriving. She will not spend her energy caring for these babies and will abandon them. You should be aware that these babies may not survive, no matter how well you care for them.

If you notice any problems or abnormalities with the babies, a veterinary examination is strongly recommended. Prompt diagnosis and treatment of illness will give each baby the best chance at survival.